It's somewhat late confirmation, but I'll be there! Thanks to the amazing organizers of Westboro Fuse for extending an invite long ago, I was finally able to confirm my attendance, and I will be there on Saturday (this coming Saturday August 17th) from 10:00 a.m. until 4 p.m. on Richmond Road. (Exact location TBD later this week - check back for an update).

I am really happy to be able to be a part of Fuse, and always appreciate the opportunity to share a few old photos, maps and other historical things right on the street in Westboro! I'll have a couple tables worth of different things, and will be happy to chat history with everyone who stops by! 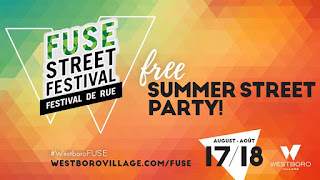 Posted by Dave Allston at 11:12 PM No comments:

The lost half of Wellington Village

The new issue of Kitchissippi Times is out this week, and in it is my monthly column "Early Days". For this month's article, my starting point was a question-slash-mystery that I've been asked about many times over the years... why are the streets in Wellington Village in alphabetical order from E to K? And why are they not quite in order? And why did it start with E? And who are Edina, Geneva and Helena?

Little did I know that investigating this story would actually coincide with another mystery I'd been researching... the unexplained development I had noticed in aerial photos of the 1920s around the Royal Ottawa Hospital property.

The headline of this article (and I even use it here for this blog post) calls it Wellington Village, but really the area in question is kind of sandwiched between Wellington Village and Carlington, adjacent to the Civic Hospital area. It literally is only home now a few houses off Island Park Drive south of the Queensway, Kitchissippi United Church, the Hydro station, and the Royal Ottawa campus. But back in the 1910s/1920s, there were big plans for this land... and serious plans at that; to the point that the City paid to install a sewer system underneath a network of streets in anticipation of the housing development to come. But it never did.

The article talks about those original plans, how things changed, and connects the dots on the street name in Wellington Village. Check it out at: https://kitchissippi.com/2019/08/06/the-wellington-village-neighbourhood-that-never-was/

Here are a few photos/maps that relate to the article that you won't see on the Kitchissippi Times website:


Posted by Dave Allston at 9:51 PM No comments:

The history of pizza in Kitchissippi (and Ottawa)

My article in July's Kitchissippi Times fit into the overall theme of the issue, which was pizza! Of course my monthly column "Early Days" is meant to focus on Kitchissippi related history, but it was tempting to try to dig up the full history of pizza in Ottawa. So I did quite a bit of research to try to nail down the first time pizza showed up in Ottawa, the first dedicated pizzeria, the first to offer delivery, the first place to get it in the neighbourhood, etc. It's a lot of information and pizza-related history squeezed into one article! The main portion of the story tells a bit of the story of David Presley (who deserves far more than just a few paragraphs of one article!). One of the most interesting people I've ever chatted with, David has lived and breathed carnivals in Ottawa and throughout North America since his childhood. Probably no one out there that knows more about the old CCE/Super Ex, and he saw it from the trenches for many, many years running his booth selling Cicero's Pizza.

Anyways, this was a fun article to write, and I hope you enjoy it!
https://kitchissippi.com/2019/07/02/the-early-days-of-pizza-parlours/


Posted by Dave Allston at 1:40 PM No comments: